The Heald, Selin, Barrett, and Fiore groups at MIT use the global chemical transport model GEOS-Chem in their research. GEOS-Chem is one of the most extensively used global models of atmospheric composition in the international community, with contributions from over 70 research groups world-wide.

The Heald, Selin, Prinn, Barrett, and Fiore groups use the global Community Earth System Model (CESM) for studies investigating the interactions between atmospheric composition and climate or the biosphere.

The Selin and Prinn groups use the Comprehensive Air Quality Model with Extensions (CAMx) to address regional-scale atmospheric chemistry.

The Fiore group uses the GFDL CM3/AM3 Chemistry-Climate Model. This NOAA GFDL general circulation model includes fully coupled tropospheric and stratosphere chemistry in a single mechanism and aerosol-cloud interactions, coupled to a dynamic vegetation land model (LM3), either coupled to ocean and sea-ice models (CM3) or forced with sea surface temperatures and sea ice distributions (AM3). AM3 includes an option to nudge the meteorology to “real” winds, enabling the group to interpret “snapshot” observations and to evaluate model processes directly with measurements at specific locations and times in the same model used to simulate changes in atmospheric composition and climate.

The Solomon group analyzes climate model results as well as reanalysis and satellite observations of the composition, circulation, and climate of the atmosphere. The group also uses the global Whole Atmosphere Community Climate Model (WACCM) for studies examining radiation, chemistry, and climate in the stratosphere and troposphere. 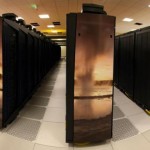 The Heald Group at MIT operates an exclusive-use cluster on campus for model simulations and data analysis. The current system consists of 192 compute cores with 90 Tb of storage. The system is linux-based and includes IDL, python, R, and Matlab analysis software as well as ifort compiler access.

Members of the Heald group working with the CESM climate model also have access to the National Center for Atmospheric Research (NCAR) high-performance and data storage supercomputing facilities. Since 2012, these resources are provided by the NCAR-Wyoming Supercomputing Center.

LAE operates an exclusive cluster called “Hex.” Hex is a Linux-based system with over 300 Tb of storage space and 492 compute cores, and also makes use of the NCAR-Wyoming Supercomputing Center.

Several atmospheric chemistry groups make use of the Svante cluster, a shared facility among students, post-docs, and researchers affiliated with The Joint Program on the Science and Policy of Global Change  or The Center For Global Change Science. The cluster is named after Svante Arrhenrius, the Swedish scientist who first speculated about fossil fuel emissions and the greenhouse effect.